Cuba Libre. The very name of the drink conjures up images of sun-drenched beaches, swaying palm trees, and white sand. This classic cocktail is a favorite among rum lovers everywhere, and with its refreshing mix of lime juice, cola, and Cuba’s finest rum, it’s easy to see why.

In this article, we’ll explore the history and taste of the Cuba Libre drink, as well as give you a recipe so you can make one for yourself! 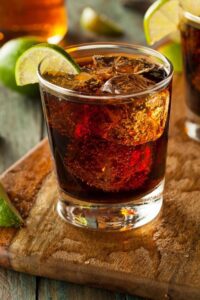 A classic Cuba Libre cocktail is a refreshing mixed drink made with lime juice, Coca Cola, and rum. This cocktail originated right after Cuban independence and the name of the drink translates to “free Cuba.”

The Cuba Libre is a tropical take on the classic rum and Coca Cola cocktail. It’s a refreshing drink that’s perfect for hot summer days.

History of the Cuba Libre Drink?

The Cuba Libre drink is said to have been created in Havana, Cuba in the early 1900s. The first mention of the drink was in a newspaper article from 1902. It is believed that the drink was created to celebrate Cuban independence from Spain.

Legend has it that a Captain in the United States Army came up with the drink by mixing Coca Cola and lime juice to his rum. He then named the drink Cuba Libre to celebrate Cuba’s freedom from Spanish rule with the toast “Por Cuba Libre”, which means For Free Cuba.

The Cuba Libre cocktail became popular in the United States right after the Spanish American War with American Soldiers and during the Prohibition era, when Americans would travel to Cuba to drink legally. After Prohibition ended, the popularity of the Cuba Libre continued, and it remains a popular mixed drink today. 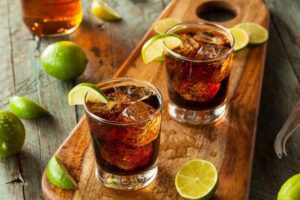 The Cuba Libre is a refreshing and flavorful cocktail. The lime juice gives the drink a tart and acidic flavor, while the cola provides sweetness and carbonation. The rum adds a smooth, sweet, and boozy flavor to the drink.

This is not just a rum and coke, but rather something that tastes very flavorful with an extra tart kick from the lime.

Cane sugar and brown sugar are often added to the Cuba Libre to give it a sweeter flavor. How much sugar you add is up to you.

This is a simple cocktail and only requires a highball glass or a rocks glass to serve the drink in and a bar spoon to give a light stir.

Making a Cuba Libre is easy, but there are a few things you can do to make sure your drink is perfect. Here are our four best tips:

With these tips in mind, you’re ready to make the perfect Cuba Libre! Just follow our recipe below.

Types of rum to use: in order of preference

The rum to use depends largely on your personal preference, whether you like a clean and crisp drink with a white rum or a little spice with a barrel aged rum. The sky is the limit when it comes to rum choices, just make sure it is a premium liquor for optimal taste. 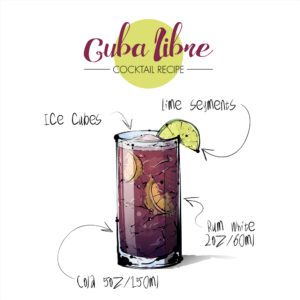 Squeeze the juice of one half of lime into the glass.

Add two ounces of rum to the glass.

Top off the glass with cola and stir briefly.

Garnish the drink with a lime wedge.

The Cuba Libre is a refreshing and flavorful cocktail that’s perfect for hot summer days. It’s also a great choice for happy hour or any time you’re looking to enjoy a delicious rum-based drink.

Variations on the Cuba Libre

There are many variations on the Cuba Libre or rum and coke, including the following:

No matter which variation you choose, you’re sure to enjoy a delicious and refreshing Cuba Libre! Cheers! 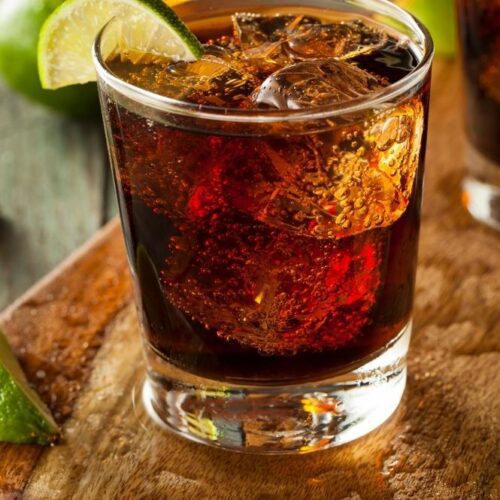 The Cuba Libre is a classic cocktail that has been around for over 100 years. This is a simple cocktail to make that blends rum, cola, and lime into one unforgettable experience.
No ratings yet
Print Pin Rate
Drink Type: Cocktail
Main Alcohol: Rum
Keyword: Cola, Lime, Rum
Prep Time: 5 minutes
Total Time: 5 minutes

There you have it! Everything you need to know about the Cuba Libre, from its history and taste, to tips on how to make the perfect drink. So what are you waiting for? Grab a lime, some rum, and mix up a Cuba Libre today!

The Mojito is one of the most popular Cuban Cocktails. Instead of the Cola, the Mojito blends Mint, sugar, lime, and club soda to create the perfect summertime cocktail.

Learn how to make this refreshing cocktail here.

This Brazilian favorite is a must try for fans of lime. This cocktail easily blends simple ingredients into a exquisite experience. The sweetness of the cola is removed for this drink, leaving you with a crisp and tart cocktail.

Sit back and relax with the easy to make recipe.

This cocktail is very similar to the Cuba Libre, but instead of a rum and coke, this is a vodka and Sprite to the max.

You know you want to try this recipe.

Delicious Kentucky Mule Recipe: A Bourbon Drink for the Ages